As they say around here, “Another day, another bowl of kinalas.”

Yep, no such thing. Made that one up just now haha. Lately, I’ve been struggling for lack of better words and then there’s lack of energy left after doing other stuff (like my day job). Thing is, I have another kinalas story to tell because, well, I live in Naga anyway where it is hands down the most famous delicacy.

This time, we tried the locally famous Aling Cely’s Kinalasan in Dimasalang St, Brgy. Sta. Cruz, Naga City, it is located very near Naga Metropolitan Cathedral. The place is very simple and basic, just like every other local eatery, but people are drawn like moths to the flame. 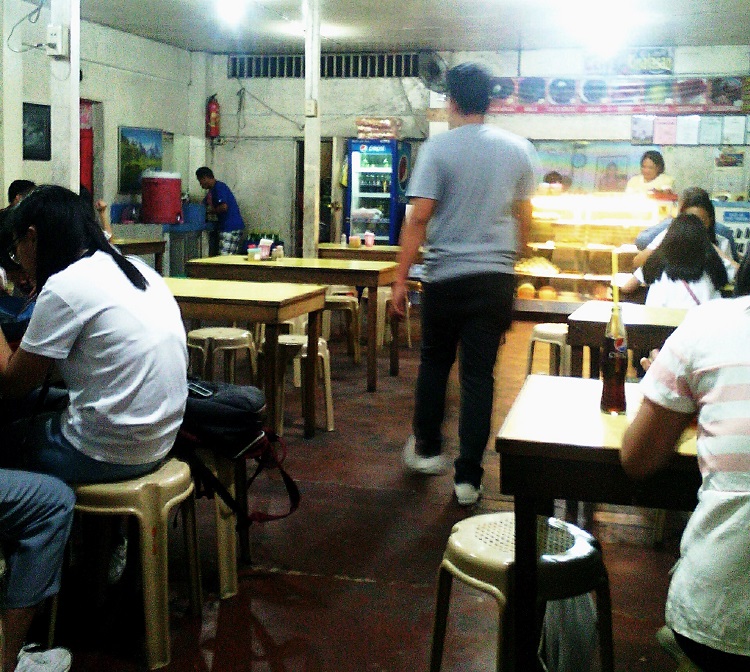 People come to Cely’s for their famous kinalas, of course. For those who are not familiar with this local delicacy, that is what Bicolanos call this bowl of goodness. It is a noodle dish with thick rich broth, pork or beef, topped with onion chives and boiled egg (by request). For a more detailed description, you can read my previous post on kinalas.

There are also those who prefer to eat Loglog (just noodles and broth, no meat and eggs). It costs less and parents often order this for their small kids.

When Naguenos think of this dish, they almost always think of Cely’s Kinalasan. Yoy said it is because many students frequently eat there as it is close to UNC and Universidad de Sta Isabel. Even he himself frequently ate the dish at Cely’s along with his closest friends so he’s got a lot of good memories associated with the place. He always ate kinalas paired with baduya (fried bananas).

Julienne herself has become partial to eating kinalas. The Sorsoganon in me though prefers to eat stuff like a lot of dried fish, dried squid, mud crabs and balaw (fermented shrimp). So, kinalas is not my all-time favorite, but it is a yummy Nagueno delicacy that is a must-try when in Bicol, particularly in Naga City.

By the way, if you notice, sometimes the quality of my photos are different with every post. When my photos are really nice and clear, it means I used my digital camera but when the pictures are somewhat pixelated like in this post, it’s because I used my phone to take the photos.

Thank you for reading! See you again soon! ❤

Explore the world with us

Adventure stories from around the world, the kitchen, and the written word.

Food, Drink, Art, Culture and Everything In Between!

Restaurant reviews and other food topics

I haven't been everywhere, but it's on my list

Taste of Disney
Dating With Ali

Date me if you dare, I promise I won’t write about you....

Just a chai-totaler who writes