I have long wanted to feature Green Earth Café in my blog ever since a friend of mine introduced me to the healthy dining experience it offers. The right opportunity presented itself when my aunts and cousins visited from Manila and I thought I’d bring them there for lunch because both my aunts cannot eat just anything anymore. They have limited food choices now that they’re older. They always have to eat healthy.

So, Green Earth Café was the first thing that popped into my head that I know serves healthy food in Naga City and with a really cozy ambience to boot. 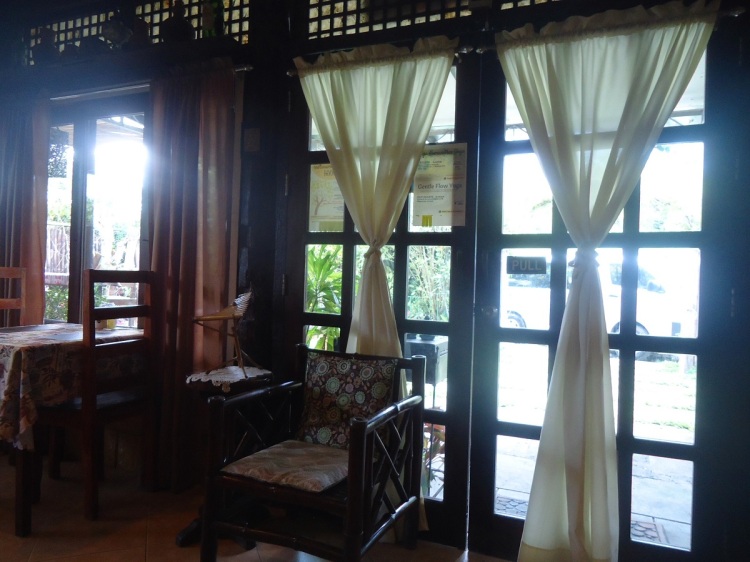 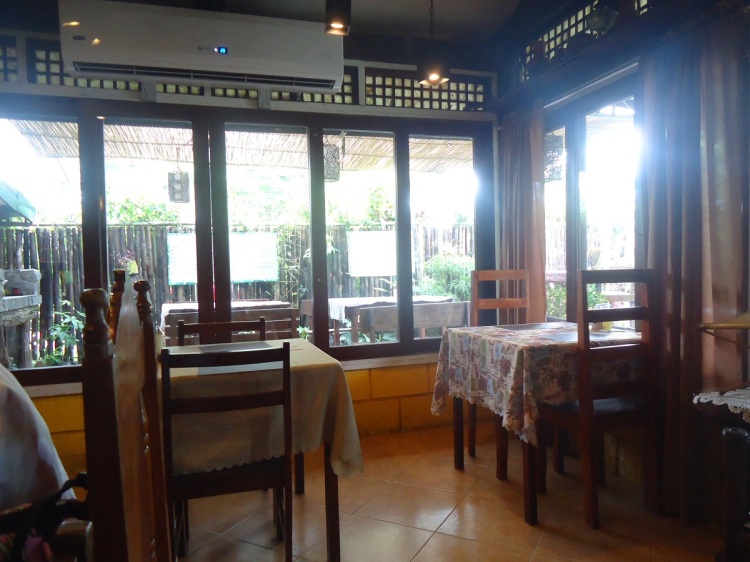 The food took a long time to prepare, something that I have not taken into consideration beforehand, knowing that my guests were tired from the long trip. And tired often leads to hungry eventually. On our table was a reminder warning that healthy food preparation may be slow but it is worth it, or something to that effect. The reminder advised that to avoid waiting for a long time, better call or text your order ahead of time. Why did I not know this before?

So, after what seemed like a looong wait, the Nacho with Salsa dip was served. The nacho tasted like it was made from scratch which I like. Everyone liked the salsa dip because it was fresh and laced with mint leaves. My kid liked this dip even though she does not eat veggies unless wrapped in lumpia wrapper and deep fried.

Next that came out was the Tofu with Black Pepper Sauce. This was a good healthy dish and the tofu was homemade.

Then there was the Shiitake Mushroom in Sesame Sauce which I thought was very similar to the dishes you can eat in a Chinese restaurant because of the sesame seeds and sauce. It also had tofu, carrots and young pechay leaves. This might be my new favorite among the dishes we ordered. 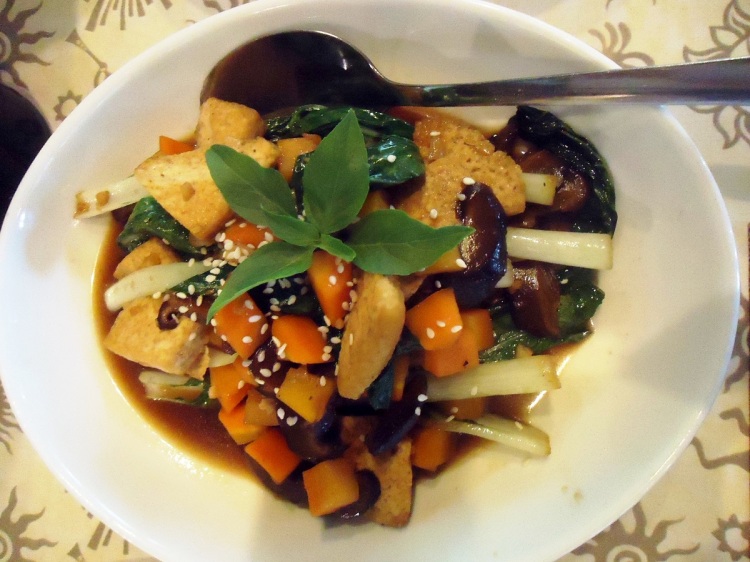 We ordered brown rice and they even made an effort to plate the rice with a sprig of mint. This mint eventually went into Nay Henring’s glass of warm water. 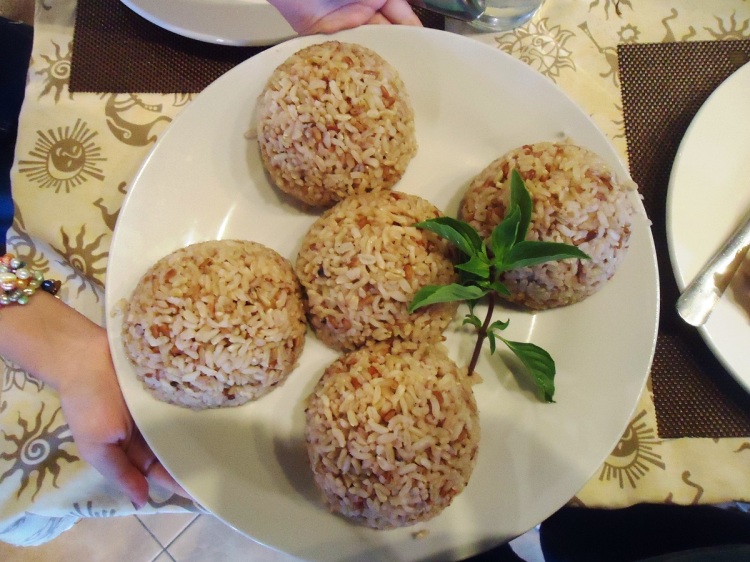 We also ordered the Vegan Mushroom Sandwich, also a favorite of mine, but not such a huge hit in our crowd of eight. 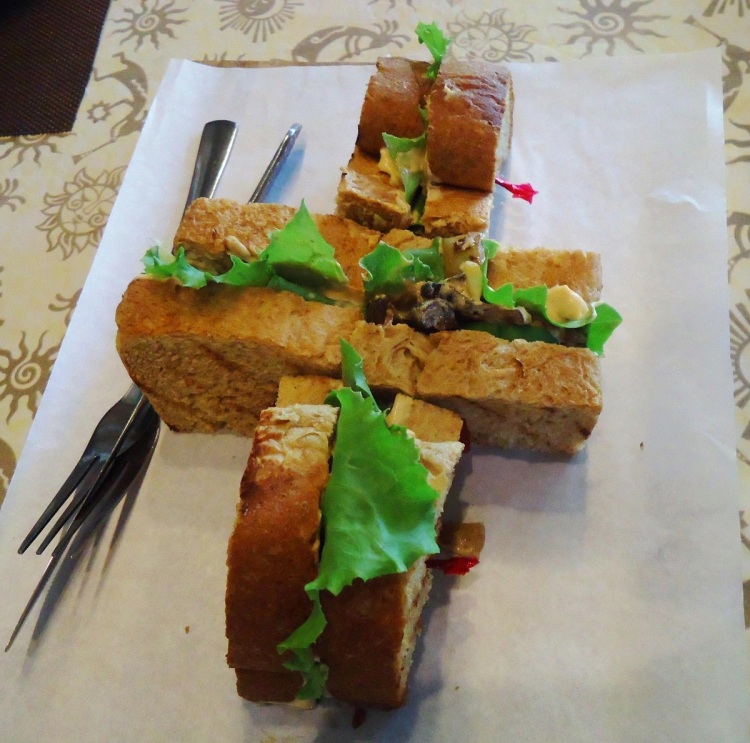 The Vegan Pad Thai was the very first dish I tasted at Green Earth Café. Bianca and I went to this café twice. And on the two occasions that I have been there, we ordered this dish, which is good for 3-4 persons. I usually like the noodles but I think they overcooked it a bit because it did not seem as al dente as I remember. And the last time I had this dish from this same café, the peanuts were young, crunchy and fresh and just barely cooked so when you munch into them they give that delightful milky taste. However, this time I forgot to get some peanuts for my plate so I cannot say that they were the same but I liked the crunch of the sprouted mung beans.

We also had the Thai Spring Rolls which was made of sprouted mung beans, grated carrots, nuts and herbs wrapped in lumpia wrapper and served with Thai style peanut sauce.

The last order that arrived was the Veggie Spring Rolls which was basically lumpia with sprouted mung beans as the main ingredient. It came with vinegar with chilli and mint, and a side dish of tomato enchilada. 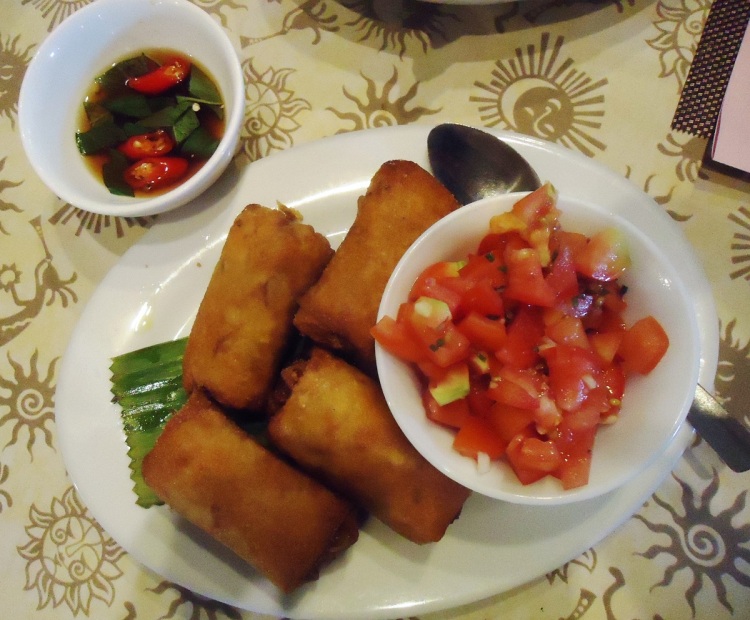 After our meal and while waiting for my aunts and cousins outside, Julienne and I had a good look around. 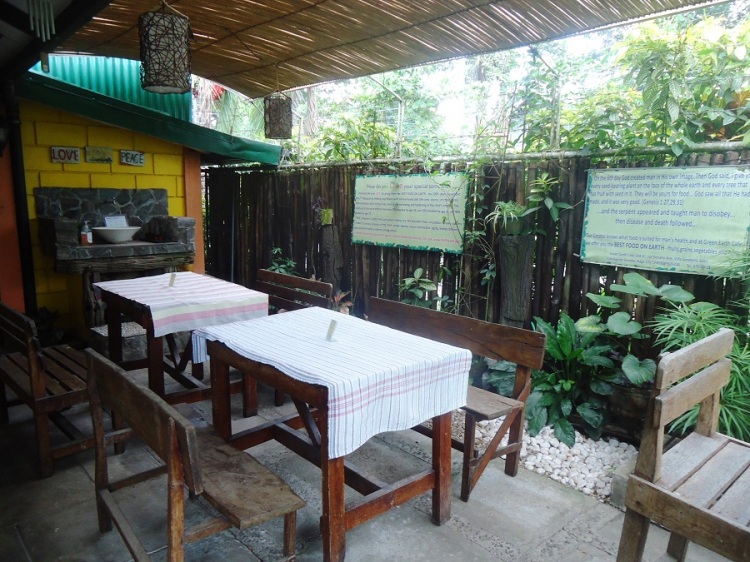 This cafe is located at 3rd St., Villa Sorabella Subdivision, Concepcion Grande, Naga City. How to find it when you’re driving: take the Maharlika Highway going to Concepcion Grande then look out for the building which houses Banco De Oro (BDO) or Olivan Home Depot, take the right turn (assuming you came from Naga City proper) going to Villa Sorabella Subdivision, just a few houses straight ahead and you’re sure to spot their signage. Its the left turn for vehicles coming from Legazpi City. For commuters: Take the jeepney going to Concepcion and ask the driver to take you to Royal Ann. The building that now houses Olivan Home Depot and BDO used to be the Royal Ann Hotel, and until now, commuters always say Royal Ann instead of BDO so as not to confuse the driver and miss their stop.

Most of the dishes at Green Earth Cafe are priced higher than Php150.00 but with all our orders, our bill only reached up to Php1,300.00+. Good healthy food and good value for money. No wonder the restaurant has a regular following. It’s a must-try for tourists and those of you who want to embrace a healthier lifestyle.

Explore the world with us

Exploring the Places No One is Talking About

Food, Drink, Art, Culture and Everything In Between!

Restaurant reviews and other food topics

I haven't been everywhere, but it's on my list